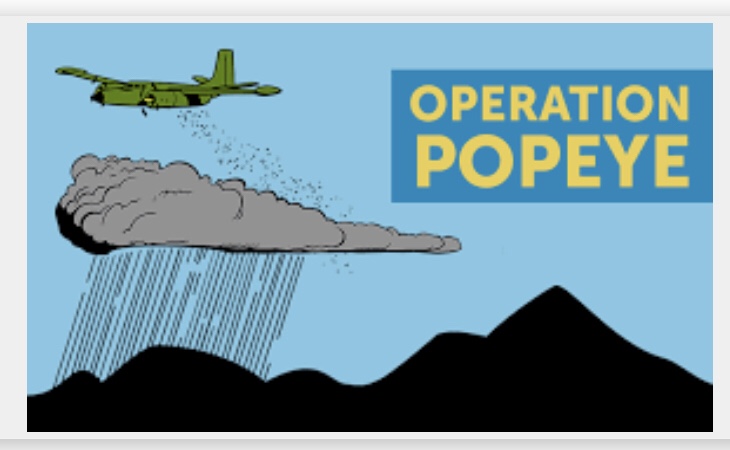 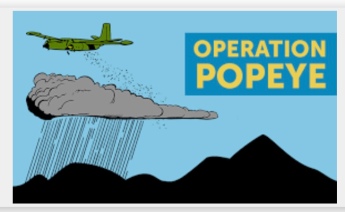 “Cloud seeding” is a type of weather modification that aims to change the amount or type of precipitation that falls from clouds by dispersing substances into the air that serve as cloud condensation or ice nuclei, which alter the microphysical processes within the cloud.

During the period from 1967 to 1972, a military chemical weather modification (cloud seeding) project called “Operation Popeye,” was carried out by the United States Air Force during the Vietnam War

The usual objective is to “increase precipitation” (rain or snow), either for its own sake or to “prevent precipitation from occurring” in days afterward. The goal of Operation Popeye was to extend the monsoon season over a specific areas of the Ho Chi Minh Trail.

Operation Popeye’s goal was to increase rainfall in carefully selected areas to deny the Vietnamese enemy, namely military supply trucks, the use of roads by

Former Secretary of Defense Robert McNamara said in a memo to then President Lyndon Johnson,

The chemical weather modification program was conducted from Thailand over Cambodia, Laos, and Vietnam, allegedly sponsored by Secretary of StateHenry Kissinger and the CIA without the authorization of then Secretary of Defense Melvin Laird, who had categorically denied to Congress that a program for modification of the weather for use as a tactical weapon even existed.

Question is, if weather was being used as a weapon more than 50 years ago, why not now and with what advanced technologies and capabilities and by whom?? B

As always, you be the judge of that!